I love the simple graphics of this old fashioned product.  Zam Buk is a herbal ointment that can be used for all sorts of issues - minor wounds, insect bites, muscular pains, etc!

It seems that in previous years it was well known in the UK and Australia.  The origins of it's name seem unclear.  A few sources say that there is a town called Zam Buk in South Africa - I think not! I do know there is a town in Nigeria called Zambuk  maybe that was the reason for the name. 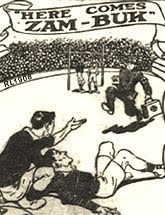 According to this article - "'Zambuk' is rarely heard today, but was once in common use in Australia and New Zealand to describe ambulance-men and first-aid officers.Stationed on the touchlines at representative and first grade games, the 'zambuk' would race across the pitch to help an injured player. They began to be replaced in the 1970s by 'trainers' and 'runners'.

Now that is a familiar sight. Reminds me of mosquito bites. Lovely design!
(Do you know if it is petroleoum-based? I stopped using it years ago for that (asssumed) reason.)

Nothing to do with the design. Yes, it is petroleum (typing slowly now) based.

Never heard of it, how cute though. We have goanna oil and pawpaw cream here.

Thanks for stopping by today!

Love these little tins... I'm such a sucker for any kind of old timey ointment :)

You are right. It's got a lovely design.

Interesting, you must have enjoyed the research. Zam Buk lip ice is the best during winter. It might not taste that great, but it really sorts chapped lips out chop chop! Love the little illustration.

I'm a sucker for packaging - love the vintage styling :)

Our bathroom cabinet is never without a tin of this even now - greatest cure-all when we were kids! I also love the vintage feel to the packaging - there's something very comforting about it. Do you know, I'd never even wondered about the origin of the name, but what a fascinating story!