Sketches of Durban Harbour and its Surrounds

Have you heard of Cathcart William Methven before?  I've  just learnt that he was an amazing chap.  These delightful sketches of Durban and its Harbour are only one of his many achievements. 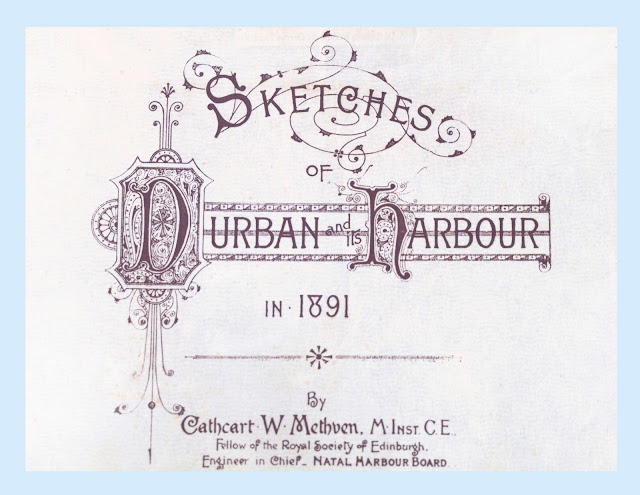 The envelope that houses these postcard reproductions states that he was a Fellow of the Royal Society of Edinburgh and  Engineer in Chief of the Natal Harbour Board.

Not only was he an engineer and a sketcher, but he was a musician, and a landscape artist too.  He was the founder of the Durban Art Gallery.  He also surveyed all the harbours on the the south east and southern coastline of South Africa. 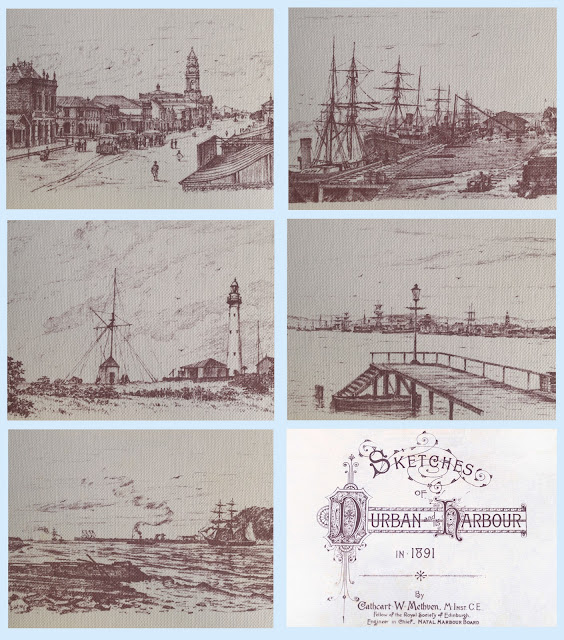 It seems that he was one of the guys us average people love to hate.  He did a zillion things and did them all well.
He was also an accomplished architect and a founder of the Natal Institutes of Architects.

This set of postcards is for sale in the online store. They were published by the Philatelic Society in 1983.

"When appointed Durban's harbour engineer in 1888, his orders were to remove a sandbar obstructing shipping at the harbour entrance, forcing passengers and cargo to be moved by lighter. Methven's plans to get rid of the bar by extending the North Pier and using the scouring action of tidal currents, brought him into conflict with a prominent lawyer, Attorney General and politician, Harry Escombe, who wanted to rely on dredging alone. Consequently Methven was dismissed on 11 July 1894. This led to a tremendous uproar ending in Escombe's resignation. Much later, in 1918, the South African government granted him £500 in recognition of his services with development of the harbour. His other recommendation that the Umhlatuzi Lagoon be developed as a second harbour for Natal, was also followed in the 1970s and is now known as Richards Bay." Wikipaedia
Source

Lots of Victorian people of his ilk were very creative and put their minds to many things. There was lots to be done and improved and it is certainly true that the Industrial Revolution freed up people to achieve like nothing previous or since. Providing both the money and the freedom to do it. In this day and age we have become very hampered in our creativity. Has Methven got something to do with the Printing family perhaps?